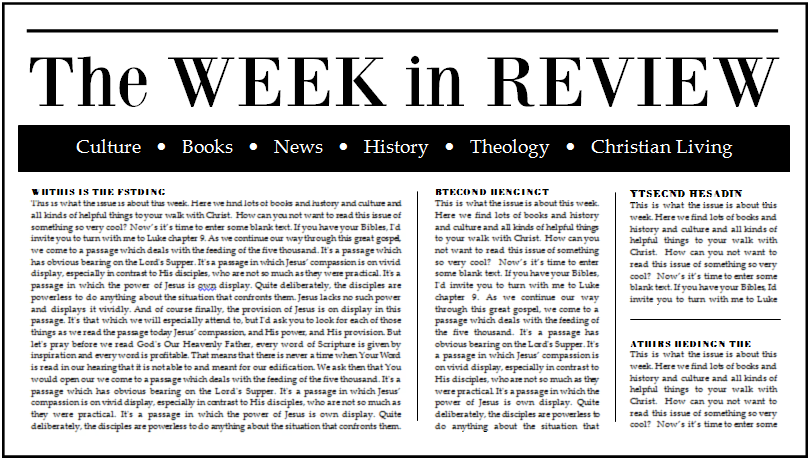 There was a lot going on this week.  Here are the highlights.

There were several good books put on sale.  Rodney Stark’s The Triumph of Christianity is $2.99 on Kindle.  Contend: Defending the Faith in a Fallen World by Aaron Armstrong is down to $1.  Understanding Spiritual Warfare: Four Views is on sale for $3.99.  David Powlison writes a chapter that will by itself be worth getting the book.  James Boice’s book, Doctrines of Grace is only $2.99. Finally,  Douglas Moo’s Galatians commentary in the BENTC series came out this week and is on sale at 34% off at Amazon, or 35% off at Westminster Books.

In the realm of world and culture, we begin with the devastating typhoon in the Philippines that seemed to take everyone by surprise.  The toll on human life is high.  Prayers should continue to be lifted as aid workers are moving to assist.

On the other side of the world, the Christian Science Monitor is reporting that Christians in Egypt are facing an increased risk in being kidnapped.

Here in the United States, we remembered the Doolittle Raiders’ amazing accomplishment in World War 2.

We also saw passage of the ENDA bill in the US Senate. This legislation would extend civil rights in the workplace based on LGBT status. The bill faces blockage by the US House of Representatives.  But the question is ‘For how long?’  If you’re wondering what this really means for Christian businesses or the culture at large, you should read Joe Carter’s FAQ’s article on ENDA.

Finally, President Obama seemed to admit something of a personal defeat by saying that people now will be able keep their insurance if they want, making good on a long-standing promise that didn’t come to fulfillment when Obamacare went into effect.  But this is only temporary and begs a larger question: does the President have the Constitutional power to actually do this?

Moving to theology and the Christian life, Credo Mag released it’s newest issue on the subject of biblical theology this week.  You can read about it here or just download the entire thing as a pdf.

The audio and (some) video of the recent SBTS Expositors Summit was released this week.  You can get all of this year’s and last year’s material here.  These are well worth the time of those laboring in the Word.

Not surprisingly, we are still talking about the recent Strange Fire book and conference.  This week, Ask Pastor John released a couple of soundbites of John Piper’s comments. So far, he commenting on this and related topics in episodes 214-218.

Tim Zulker wrote a helpful piece on evangelism over at GoThereFor.com, advising that when we think of barriers to evangelism, we should first think about the person’ heart.

“This day was the best that I have seen since I came to England” opens an article by Jeremy Walker, as he recounts a diary entry of one Christian from a previous generation.  This becomes a barometer for us as we seek to the measure our own spiritual appetite.

Finally, Matthew Smethurst interviews Michael Oh, the new Executive Director/CEO of the Lausanne movement. I was greatly encouraged by this video interview as Oh challenges us to rethink how we (individuals and churches) allocate our resources.  Why should we do that?  Consider the fact that only 5 cents of every $1 in our current missions giving is currently getting to the mission field.

And in the “just for fun” category, the minds of every longtime Doctor Who fan were completely blown by this 7 minute prologue to the upcoming 50th anniversary special (below).  And, yes, I’ve just hoisted my geek flag for all the world to see.