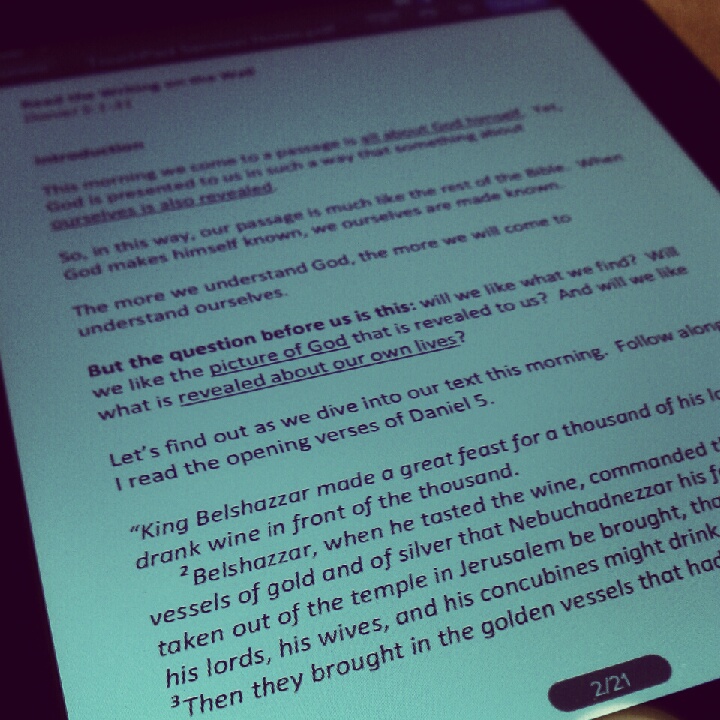 Earlier this year, I was looking to buy a new laptop and I came across a deal where buying an on sale laptop from HP gave you the option of getting their TouchPad for $149.  This seemed like the ideal way to get a poor man’s iPad so I took the deal.  At first, this meant giving my Kindle to my oldest son who reads even more than me, I think.  It also mean having portable access to document, the internet, media, etc—all that a tablet is supposed to be.  But then, I began using it to teach.  I was going over to a couple’s house, leading them through a new members class and it seemed like an great way to have my notes with me without having to print out the most recent revisions or lug my laptop there.

From there, I began thinking, ‘Why not preach from it?’  I had seen someone else preach from an iPad a couple months before at a pastors conference and it stuck with me.  I was worried that it would be distracting on wouldn’t actually work at all and was hesitant to try.  But then, I decided I should just try it and see what happened.  The first time, I also took a printed copy of my notes with me, tuck away in my Bible—just in case.  Since then, I’ve never gone back to paper.  It’s now been about five months of consistent preaching from my TouchPad, and I thought I would offer some practical thoughts and cautions on the why and how of preaching from a tablet.

1. Don’t let the Technology Be the Focus in the Pulpit

One of my big goals in using the TouchPad was to not let anyone know I was using it.  Obviously, anyone who was sitting next to me at the front during the service or was watching me closely would see it.  But I wasn’t about to make a big announcement about changing over to it.  Furthermore, I wasn’t going to carry it around the platform or fiddle with it in the pulpit.  I even go so far as to make myself look up and make eye-contact when I swipe the page, to detract attention away from my hands. Why?  Because there is already more than enough things that can be used as a distraction to people during preaching.  If I really believe that God is speaking through the proclamation of his word, then I don’t ever want to add something to that list of distractions. (If I don’t believe that, then I should get out of ministry.) Whether it’s clothes, an out-of-place illustration, or alerting people to my notes in general, I try hard to avoid drawing attention to myself in a way that causes people to stop listening and start thinking about something else.

2. Use the Technology Only If It Serves Your Ministry

There is a HUGE temptation to use technology for the sake of using technology. It makes you look cool and hip to culture. Forget those things. If the technology doesn’t serve you well in your preaching ministry, then scrap it.  If you’re going to be fumbling around or always pining away for your old system, stay away from the tablet.  Use what works for you. Use pen and paper until you die if you need to because it’s more important that you preach well than it is to be tech-savvy.

3. Know the Basics of Your Tablet

If you’re going to use a tablet, then make sure you know what you’re doing.  By this, I mean know how it works to the degree that you can alter settings that make it appropriate for undistracted preaching.  Don’t buy a tablet and take it into the pulpit next week.  Here some specific things I have learned to do:

4. Remember that Technology Won’t Make You a Great Preacher

Use a tablet, don’t use a tablet—it doesn’t really matter in the end.  But don’t fall into the trap of believing that technology will inherently make you a better preacher.  If you’re going to be great in the pulpit, you need to be great in the study, great in the prayer closet, and great at knowing your people.  Remember who you’re preaching to, remember whose help you need in preaching, and work very, very hard at understanding and applying God’s word.  This is what will make you a great preacher.