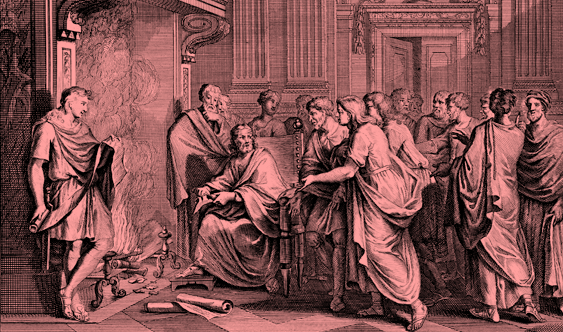 In the book of Jeremiah we have a great contrast between two kings.  One king was the young reformer, Josiah.  At the beginning of the book, Jeremiah says that his ministry as a prophet began under the reign of Josiah, who was the last godly king of Judah.  We read in 2 Kings that when Josiah is 18, he begins to fix up the temple. And as money is being collected to give to the workers, the book of the Law is found in the temple.  Just think about for a minute. That Law—the word of God that was supposed to guide every part of their life—and it had to be found.  And when it was found the people read it and were astonished; they had never heard it before!   And it proclaims judgment for sin for their not following the word of God, so they bring it to Josiah and read it to him.  So, what was his response?  2 Kings 22:11 says, “When the king heard the words of the Book of the Law, he tore his clothes.” In the next two chapters, we see the king repenting before God and reforming the nation according to God’s word.

That’s one response to God’s word.  But then you have another prominent response in Jeremiah from an Israelite king.  The second one is actually from Josiah’s son, Jehoiakim, who in no way followed in his father’s footsteps.  Jeremiah receives God’s word and he tells it to Baruch so that it can be written down and read to the leaders of Judah.  As with Josiah, the people who first heard God’s word through Jeremiah bring it to the king.  But then, in Jeremiah 36, we read that as the court official would “read three or four columns, the king would cut them off with a knife and throw them into the fire in the fire pot, until the entire scroll was consumed in the fire that was in the fire pot. Yet neither the king nor any of his servants who heard all these words was afraid, nor did they tear their garments.” (36:23-24). This is another response to God’s Word—ignore, even destroy it because you don’t like it’s message.

As Christians, Jehoiakim’s response should, at one level, repel us and infuriate us.  For we know that God’s word is from the Almighty Sovereign Lord—a gracious revelation of himself for the good of his people.  The king doesn’t want to hear of God’s judgment and so burns the Scriptures.  It’s inconceivable that one would treat God’s word with such contempt!

Yet, at another level, the passage should cause us to laugh.  Why?  Because we know that God’s word is not confined to a scroll.  In fact, the very next verse says, “Now after the king had burned the scroll with the words that Baruch wrote at Jeremiah’s dictation, the word of the Lord came to Jeremiah:  ‘Take another scroll and write on it all the former words that were in the first scroll, which Jehoiakim the king of Judah has burned’” (36:27-28). Jehoiakim tries to burn away the Word of God but he just gives it again.  Thus, we laugh at the incredible futile attempt of the king even as we are minded of another prophet’s words: “The grass withers, the flower fades, but the word of our God will stand forever” (Isa 40:8).

Recently, we have seen how many respond to the destruction or desecration of the Koran. More than that, we have been shocked and saddened that American lives have been taken; even more lives than the numbers of Korans burned.  Yet, this should never be the response of a Christian to the burning of the Bible.  Though we will be rightly saddened by an obvious contempt for God if the Scriptures were to be burned, we know that his word is not bound by any scroll or book or hard-drive.  God’s word is pervasive and unstoppable, like God himself.  No one can ever thwart God or his purposes simply by burning a mere copy of his Word.

Therefore, as Christians, our lasting response to any disrespect to God through a desecration of his word will be one of confident assurance that our hope is in God himself.   With that, will also come a renewed desire to know, love, and serve God as we ourselves treasure his word, seeking to obey it and be changed by it.