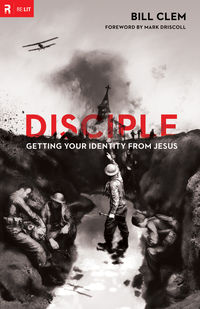 Disciple: Getting your Identity from Christ is a new book by Bill Clem under the Re: Lit imprint of Crossway Books.  I don’t know much about Clem other than his association with Mars Hill Church (Seattle), but I liked the title of the book.  So, I was eager to dig in and see what I found.

The book is designed to help people better understand what it means to live as a disciple of Christ.  Throughout the book, Clem seeks to ground “our identity as disciples in the storyline of the Bible.”  We see this as he lays out what he sees as the essential elements of Christian discipleship: image, worship, community, and mission.  Each topic is first put forth positively as Clem gives an overview of the biblical teaching.  Then, he offers a brief survey of the ways in which the discipleship element can be distorted.  For example, for the element of image, we see that the image of God is common to all humans and that, as image bearers, we are valuable, mysterious, designed for wonder, interconnected, for a broken world.  However, this idea of image is distorted when we believe I am what I do; I am what has been done to me; or I am my relationships, roles, and responsibilities.  The discussion of these distortion chapters reads like a mini-counseling seminar, with the counsel being driven by the Scripture—i.e., biblical counseling at its best.  The instruction on the four essentials is based on the foundation of two chapters where Clem lays out the reality of God’s story of redemptive history, showing how Jesus is the hero of the story and how he calls people to be a part of that story.

Although, one could argue with the four essentials he picks, every section is important and Clem offers good material on each of them.  This leads to one of several strengths of the book—biblical instruction.  Clem uses a lot of Scripture to back up what he write, using both clear instructive statements and biblical examples found in narratives.  Related to this is another strength: the digging deeper section at the end of each chapter.  Clem knows he can’t hit everything in each chapter.  So, he ends with a list of Scripture that serves as a short Bible study on the given topic.  The result is the option of fulfilling the title, namely, digging deeper into God’s word to find out more.

Another positive to the book is the practical helps given for implementing the instruction on discipleship.  Clem ends the book with a chapter on making a plan for growing as a disciple on a daily and weekly basis.  Then, he takes it to another level and has a chapter on multiplication–making all of this work on a church level.  I was especially happy to see the first thing on his list be something that is often overlooked and assumed, which means it doesn’t actually happen–prayer.

Finally, Clem also writes in an engaging way.  Though sometimes there is slight sarcastic edge that sounds very similar to his ministry partner, Mark Driscoll, he often has his own voice, which is clear and helpful.  Clem is not a wordy writer, and the result is a book that moves fast, providing a lot of good teaching in a short space.

Despite what I liked about the book there were a couple things I didn’t like.  Most of these were found in the first chapter.  First, Clem doesn’t integrate well the history of God’s redemption and the revelation of it in his word as classic theological concepts.  Given the high view of the Scriptures demonstrated in the book, I doubt very seriously that he doesn’t hold to inerrancy.  Nevertheless, he uses language that’s a little muddled when he says, “The God of the Bible does not seem as interested in us knowing about him as he desires for us to actually know him—to have an experiential knowledge of him. . . .  This experience of coming to know him happens to every person, but in many different ways.  One of the primary ways we can come to know him is through the Bible. It contains the story of God’s revelation to us” (10).  First, I was surprised that he didn’t say ‘the primary way people know God is through the Bible.’  Yes, creation tells us something of God (cf Romans 1), but not in a saving way.  Furthermore, many ways of knowing God is set in contrast to one primary way of knowing him through the Bible.  How can someone come to actually know God in a saving way apart from the Bible?  But maybe Clem doesn’t mean a saving way at this point in the chapter?  If he doesn’t it’s not clear in that section.  If he does, then I’m not sure what he means because it sounds like he is undermining his view of God, the Bible, and salvation in Christ.

Furthermore, the last line—“[The Bible] contains the story of God’s revelation to us”—is confusing.  In one sense that is true. We see a history of redemption unfolding in the narrative of Scripture. Yet, that sentence also evokes the language of recent debate about what the Scriptures are—the revelation of God or the record of his revelation.  The first says the Scripture are the Word of God, the second that they merely contain the Word of God.  This is all bound up with issues of inerrancy and the specific language of that debate.  Again, I’m fairly certain Clem is speaking about the history of redemption, but it would have been nice to see different language used or more clarity of explanation here.

Second, Clem has much good to say about the Triune nature of God and how that plays into the unfolding story of God.  But, here, I think he falters as he tries to make God’s clear passion for his glory more palatable for lost people: “Now consider all the objections of your friends or maybe even objection you have raised because it all seems like an egocentric God created people just to worship him. What a different picture it is if the Father longs to have people worship the Son and the Spirit, the Son longs for people to worship the Father and the Spirit, and the Spirit longs for image bearers to worship the Father and the Son” (21).  This seems like a dodge for the ego-busting reality that God does create man to worship him.  But the reality is that worshipping him actually brings us joy and satisfaction because that is exactly what we were created for!  John Piper has ably defended this understanding, I think, in Desiring God.  More than that, though there is truth in what Clem says, I think he overreaches. Theology rises and falls on exegesis and I think there are no verses that say the “Father longs to have people worship . . . the Spirit.” There is certainly a mutual desire for the Father to glorify the Son, but the Son only desires to be glorified in order to glorify the Father (John 14-17), and the Spirit seems to direct all worship to the Father through the Son (John 14:26; John 15:26; 16:14).

The last quibble is certainly a small one.  I love the cover of the book (see insert) but I have no idea how it connects to the content of the book!  There is so much of an emphasis on story I’m surprised that they used warfare imagery to promote it.  Again, a small matter considering the sage advice to never judge a book by its cover.

So, would I recommend this book?  Absolutely.  Despite, what I would see as minor tweaks that I would make on a few (important) issues, the large majority of the book is excellent—biblically rich and practically helpful.  Clem presents a compelling vision of living as a disciple of Christ and offers encouraging counsel on how to actually get there, establishing a life rooted in the grace of the gospel. I think the book could be used as a resource for a church’s pastoral team to think through its ministries and strategies for the future as much as it could be used for study with the church at large.  Clem writes in a clear, straightforward style that makes the content clear as well as compelling.

*Disclosure:  I received this book for free from the publisher for review purposes.  This has not affected the content of this review.  Furthermore, this was a pre-publication edition and some of the book may have been edited in the print edition.